Where Would the Tea Party Be Without Feminism? 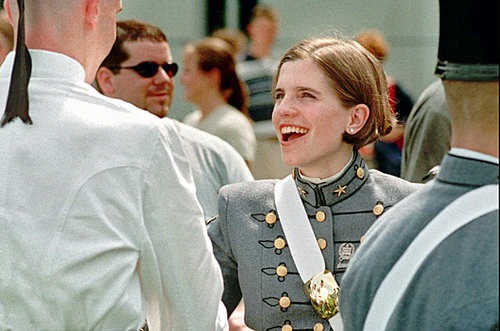 In his campaign for reelection to the Senate, Lindsey Graham is facing several challengers from his right, all of whom are complaining that Graham is not conservative enough to represent the state of South Carolina.

The Citadel was once an all-male military school. In 1995, Shannon Faulkner was the first woman to enroll there. Her effort was spearheaded by the Clinton Administration and the National Organization for Women. She quit after a week, citing extensive harassment at the hands of her male classmates, who danced and cheered as she drove off from the school.

While Faulkner had been pursuing her case at The Citadel, however, the Clinton Administration had been attempting to force the Virginia Military Institute (VMI) to accept women. In June 1996, it succeeded, when the Supreme Court, in United States v. Virginia, struck down VMI’s all-male admissions policy. Three days later, The Citadel gave up its battle against women cadets. That same year, Nancy Mace enrolled there, and graduated in 1999.

The VMI decision was written by feminist Ruth Bader Ginsburg, and was joined by Court liberals John Paul Stevens, David Souter, and Stephen Breyer, as well as Court moderates Sandra Day O’Connor and Anthony Kennedy. The sole hard-right conservative to strike down the VMI policy was Chief Justice William Rehnquist, though he did so on narrower grounds than the majority. Antonin Scalia dissented. Clarence Thomas recused himself because his son was a student at VMI.

And now we have Nancy Mace complaining that Lindsey Graham is too liberal.

Once upon a time, conservatism derived its edge, its sense of will and adversity, from the fact that many of its most illustrious leaders had been outsiders. From Benjamin Disraeli to Phyllis Schlafly, the movement  understood its work as the volition of the upstart. “I was not,” hissed Burke at the end of his life,

like his Grace of Bedford, swaddled, and rocked, and dandled into a legislator; “Nitor in adversum” is the motto for a man like me….At every step of my progress in life, (for in every step was I traversed and opposed,) and at every turnpike I met, I was obliged to show my passport, and again and again to prove my sole title to the honour of being useful to my country, by a proof that I was not wholly unacquainted with its laws, and the whole system of its interests both abroad and at home. Otherwise no rank, no toleration, even for me.

In the summer of 1996, The Citadel opened its doors to women and Nancy took a bold step—she simply hopped in her car and drove to The Citadel to pick up an application. The next day, she submitted it.

A few days later, Nancy was accepted as one of the first women ever to enter the Citadel’s ranks as a “knob.” Nancy took the plunge and joined the Corps of Cadets, eager to follow in her father’s footsteps.

That doesn’t bode well for the movement.

Corey Robin teaches political science at Brooklyn College and the CUNY Graduate Center. He is the author of The Reactionary Mind: Conservatism from Edmund Burke to Sarah Palin. This originally appeared on his blog.